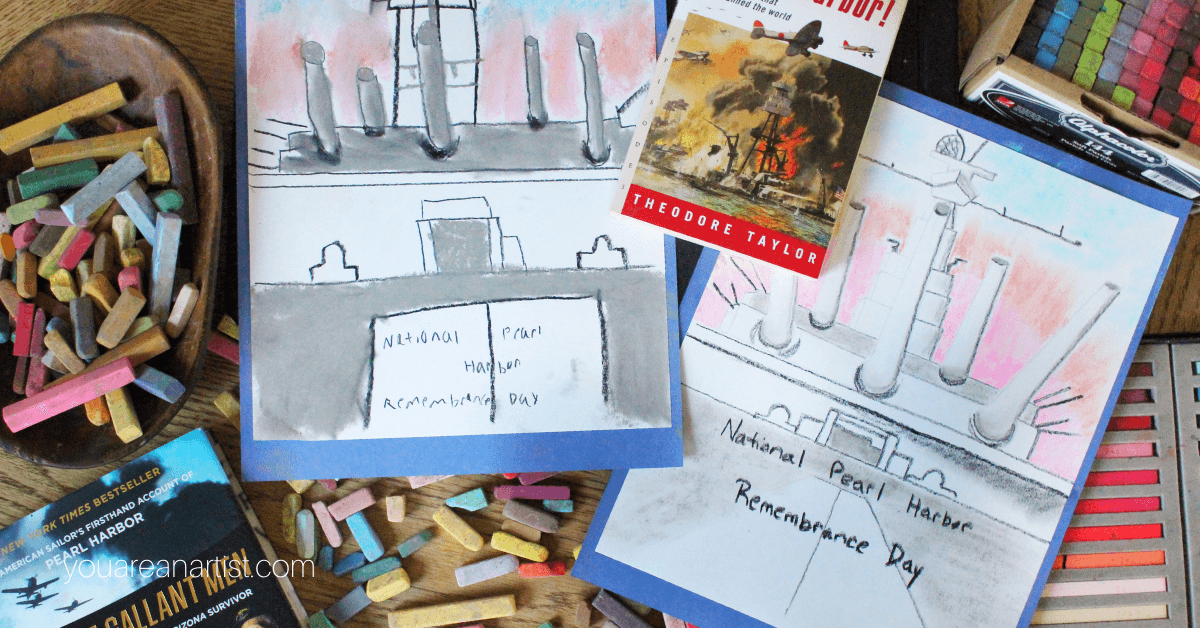 These modern history art lessons are perfect for adding a bit of art to your homeschool history studies! These lessons are also excellent for history buffs, young and old.

My son has a passion for history. More specifically, he loves learning about World War II and onward. This love affair started a few years ago when he watched a documentary about D-Day. Suddenly, he couldn’t get enough. My son read all the World War II books he could find and watched all the documentaries available to him. We’ve gone to several reenactments, made our own World War II newspaper, and even made period-themed recipes! He has woven in and out of the European theater with an obsession with Great Britain. This year he is studying the Pacific theater more in-depth with various books, Wondrium lectures, and now Nana’s Pearl Harbor Remembrance art lesson.

December 7th is National Pearl Harbor Remembrance Day, and in 2021 we will remember the 80th anniversary of this historic event. In 1941, a surprise attack by Japan on Pearl Harbor resulted in 188 U.S. aircraft destroyed, 2,403 Americans killed, and 1,178 others wounded.

In November 2019, my son discovered that one of the survivors of the USS Arizona was still alive AND had written a memoir about his experience.

Shortly afterward, Mr. Stratton passed away. This book is now a most treasured possession of my son.

Modern History with the You ARE An Artist Clubhouse Membership

Did you know your modern history buff will have access to 700+ chalk pastel lessons including Nana’s modern history course with the You ARE An Artist Complete Clubhouse Membership!

You’ll also have exclusive access to these art lessons:

Along with your favorite history books and documentaries you can now add in the hands-on resources of Nana’s art courses. While studying World War II we have enjoyed these corresponding history art lessons:

These lessons have made my history buff extremely happy. Isn’t it wonderful how we were able to pull from Nana’s different courses to create art lessons to fit my son’s interests? That’s just one of the reasons I adore our You ARE An Artist Complete Clubhouse membership. I can cater to my children’s interests in colorful and fun ways that won’t soon be forgotten.

Erin is a writer, blogger, and homeschooler to two intense kids. Her blog is filled with information to help you explore a child led education while making meaningful connections with your children. Discover favorite read alouds, seasonal books, games, art projects, hands-on activities, and learn to just breathe through the ups and downs of life. She loves nature, farm life, good books, knitting, new pens, and hot coffee. Erin is a contributing writer for Weird Unsocialized Homeschoolers. Her work has also been featured on Simple Homeschool and Book Shark.